The stakes were high. Over the last 25 years there had been practically no communication or diplomatic ties between China and the United States. Finally, in 1972, Richard Nixon, of all presidents, was going on an official visit to mainland China.

Would it be a success? Everyone had an opinion, but no one knew for certain.

To a couple of psychologists named Ruth Beyth and Baruch Fischhoff, this presented the perfect test case for a theory known as ‘Hindsight Bias', which had never been formally described or studied academically.

Beyth and Fischhoff devised the first experiment to directly test hindsight bias (1). They asked participants to judge the likelihood of several outcomes of US president Richard Nixon's upcoming visits to Beijing and Moscow. Later, the participants had to recall the probability they originally assigned to the outcomes.

You can guess the result.

The participants in the experiment significantly overestimated the likelihood that the event that did happen, would happen. In fact, the participants “seldom perceived having been very surprised by what had or had not happened.”

The psychologists titled their paper “I knew it would happen”.

Hindsight bias “refers to the common tendency for people to perceive events that have already occurred as having been more predictable than they actually were before the events took place. As a result, people often believe, after an event has occurred, that they would have predicted, or perhaps even would have known with a high degree of certainty, what the outcome of the event would have been, before the event occurred” (2).

Have you recently thought to yourself something along the lines of, “I could see it coming”? I knew this pandemic would cause mayhem. I should have acted. Well the damage is done now, but next time I’ll be smarter.”

If you haven’t, you’d probably be in the minority. Most have had that thought because that is how we process things as humans. And according to Beyth and Fischhoff, hindsight bias is part of being human.

One question we can ask is this, “does hindsight bias help or hinder good investment outcomes?”

In another study, “Hindsight bias and investment decisions making empirical evidence…” (4), researchers studied stock market investors, bank financial managers and students. They found that “The respondents were unable to learn from previous errors and unable to detect their errors in estimate and recall. This error in prediction leads the investor to bear the risk above their accepted level which is harmful to their wealth.”

Nobel Prize winner Robert Schiller would agree with this hypothesis. In his book Irrational Exuberance, Schiller says “The reason for overconfidence may also have to do with hindsight bias, a tendency to think that one would have known actual events were coming before they happened… Hindsight bias encourages a view of the world as more predictable than it really is.” (5)

One anticipated result of hindsight bias is that it may also lead to regret. In other words, “I knew it would happen and I didn’t avoid it and now I’m angry at myself.” This might lead to taking risk off the table reasoning that once bitten, twice shy.

One way to correct hindsight bias is to look at the many predictions that have been made that are just flat out wrong. Here are a few about the New Zealand share market… 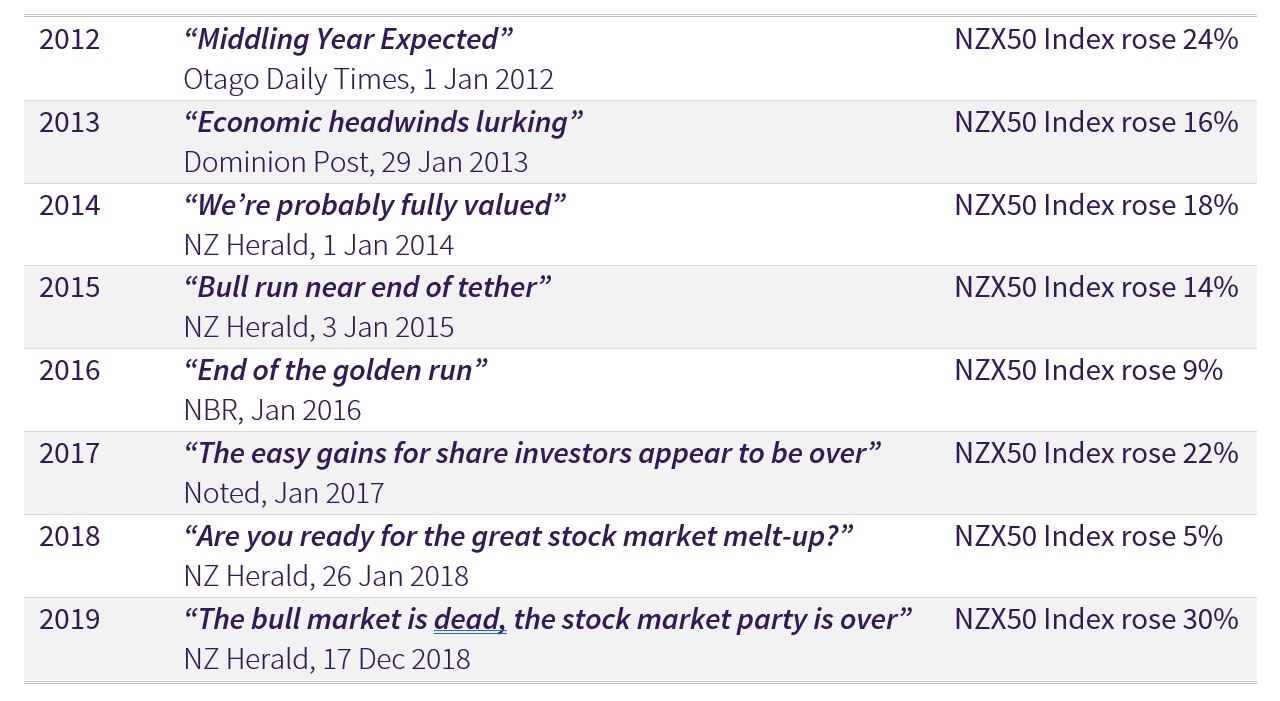 Clearly, future events aren’t as predictable as they appear. I mean who could have known for certain that Richard Nixon would successfully thaw relations with China and the USSR? Before the trip, there weren’t many regarding that as a likely outcome.

So, if you feel like you saw the Coronavirus coming and regret not taking more decisive action, well that just makes you… normal. We are all programmed to feel that way. Our minds desperately want to live in a sensible, predictable world, not one with remote probabilities that can become big problems.

That’s okay, in fact, it’s human nature. By acknowledging that, you can hopefully avoid coming to the ‘hindsight biased’ conclusion “I knew it would happen.”

As Sophocles put it in Oedipus Rex, “I have no desire to suffer twice, in reality and then in retrospect.”