Market timing is a wicked idea

Renowned investor and author Charles Ellis once said “Market timing is a wicked idea – don’t try it, ever”

If having impressive credentials is any guide, then Charles Ellis should know what he’s talking about.
His famous article “The Loser’s Game” won a Graham and Dodd award in 1977. He was twice appointed to the faculty of Harvard Business School and went to the Yale School of Management in 1986. He chaired the investment committee at Yale from 1997 to 2008 and served on the Board of Directors of Harvard Business School. He also served as the Chair of the Board of the Institute of Chartered Financial Analysts.

So, what is it that convinced Charles Ellis that market timing is a bad idea?

A balanced consideration of the evidence.

On the surface, market timing is a zero-sum game. If I sell, someone else buys, and if I buy, someone else sells. Equal and opposing actions in which both parties typically think their side of the trade is the correct one. Given the speculative nature of the trade (i.e. there will be a winner and a loser), one might think that it’s the professional managers that would usually come out on top.

However, many studies have shown that even professional managers are highly likely to get market timing decisions wrong.

One landmark contribution was by Gary P. Brinson, L. Randolph Hood and Gilbert L. Beebower who published an article in the Financial Analysts Journal in July/August 1986 entitled “Determinants of Portfolio Performance.” It’s an impressive sounding title. To understand this subject, the authors studied 91 major corporate pension plans over a 10 year period which included both good and bad markets. 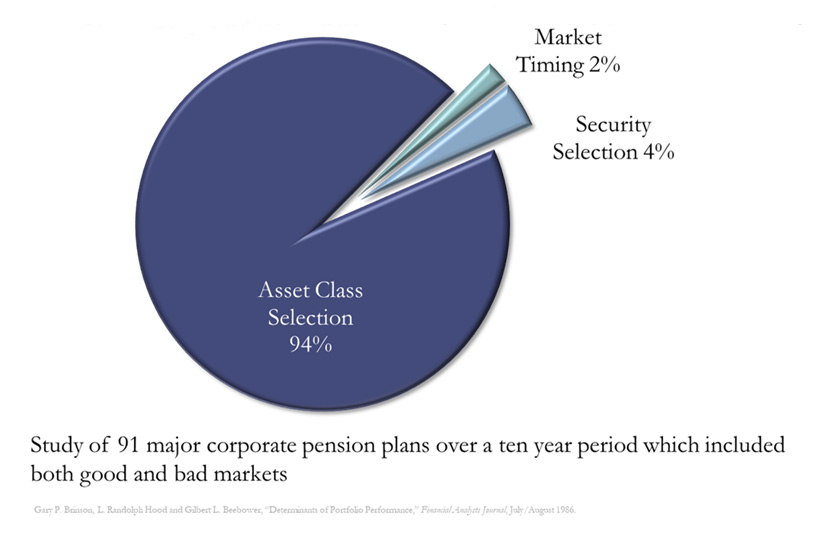 Their conclusion was stunning. They looked at the contribution to returns that resulted from asset allocation, security selection and market timing. They found that large pension funds, with access to the best investment consultants, had LOST 0.66% per year in returns as a result of market timing decisions and that overall market timing only determined 2% of the overall investment performance. The implication was huge. If these large professionally managed pension funds didn’t know how to time markets, what chance did the rest of the industry have? 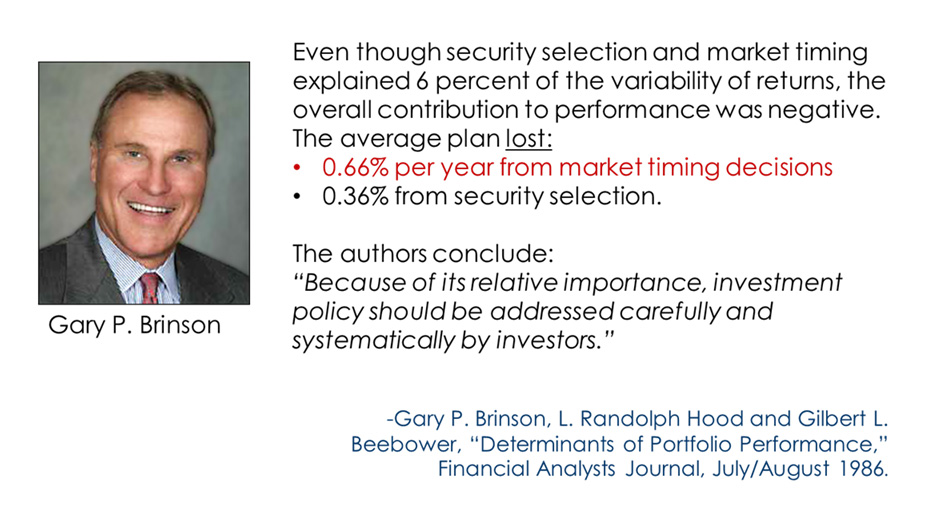 The net result of their study led the authors to this conclusion, “Because of its relative importance, investment policy should be addressed carefully and systematically by investors.“ In other words, investors should have a policy that ensures that they behave appropriately and systematically to achieve the desired investment outcomes. Don’t leave big decisions to gut feel and speculation, but have a system for making good decisions.

Charles Ellis was right. Market timing is a wicked idea. Even the most sophisticated investors seem to lose money trying. The best approach is to have a policy and stick to it. Over time, you are much more likely to get the results you are planning for.